The version of the questionnaire, which was translated into English, was validated by the use of an online data collection. Here, 58 participants assessed different interactive products such as cell phones, digital cameras, PCs, laptops, tablets, software and mobile applications. The original version of the questionnaire (in German) had a design based on several studies: The item selection was based on two online data acquisitions. To determine reliability and validity two laboratory experimental studies were conducted. A final survey also reappraised the measurement quality of the final version.

In order to meet the criterion of objectivity, the standardised guidelines that are available for download should be adhered to during the implementation and assessment of the data collection.

The internal consistency of the scales, which were transferred from German, complies to a high degree. 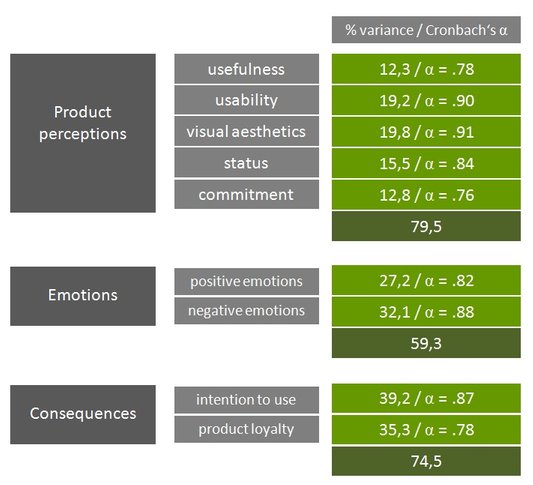 The validity of the original German version of the questionnaire was tested using a few procedural methods.

Second, the relationships between the dimensions of the questionnaire and an objective usability measure were analysed (criterion-related validity). With respect to product perceptions, it could be shown that this performance measure was highly correlated with the subjective ratings of instrumental qualitites (usefulness and usability). However, no significant correlations have been obtained between performance and non-instrumental quality ratings (visual aesthetics, status, commitment).